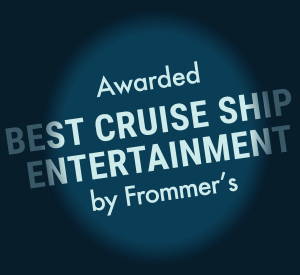 All entertainment onboard the Norwegian Escape is available to Joanie’s Guests! Get ready to experience the best entertainment on the ocean. It’s showtime. All the time. Details about each show will be available soon.

Tickle your funny bone at Headliner’s Comedy Club with performances by Levity Entertainment Group’s roster of top-notch comedians. Employing over 300 artists nationwide, Levity is the largest producer of live comedy, creating tours and TV specials for the biggest names in the industry, including Daniel Tosh, Amy Shumer, Gabriel Iglesias and Jeff Dunham. With several hilarious shows per week, prepare for a sidesplitting good time with Levity Entertainment Group.

Howl at the Moon

Bring your friends and your favorite song requests for an unforgettable musical journey. This is Howl at the Moon, the world’s greatest rock ‘n’ roll dueling piano show. Come sing and dance the night away as our talented musicians jam out and perform your favorite songs from the 70s, 80s, 90s and today. From Billy Joel classics to modern-day Lady Gaga pop tunes, our versatile musicians can do it all. So get ready for a howlin’ good time.

MALEVO, created by director, choreographer, and dancer Matías Jaime, this thrilling group specializes in Malambo—a traditional Argentine folk dance of great virility and dexterity—and seeks to take it beyond its limits with a modern, avant-garde, and transgressive approach, merging it with other dance styles like flamenco and urban percussion. After being named an official “Cultural Ambassador to the National Identity of Argentina,” and on the tail of numerous successes including events and performances in Las Vegas, New York, Dubai, Paris, Cairo, St Petersburg and Montreal as well as special performances with Latin pop-star Ricky Martin, Cirque du Soleil, a year-long residency at Universal Studios Japan and making it to semi-finalists on the hit TV show – America’s Got Talent.
Show uses strobe lights. We kindly ask the guests to remain seated as the performers will be using the aisles around them.

The Choir of Man: Main Theatre

Pull up a chair at The Choir of Man and raise your glass to high energy dancing and hit songs that flow as freely as the beer. You’ll feel right at home in The Jungle, the rockin’ English pub where the talented cast performs everything from classic rock hits and pub tunes to sing-along favorites. Leave your worries behind and toast to a memorable night at this feel good show!

Enjoy the ambiance in the Supper Club, our intimate theater experience featuring a variety of musical entertainment.