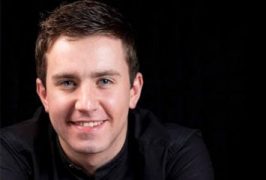 Dingle native, David Geaney, a 5 X World Champion Dancer, is delighted to be a part of Joanie Madden’s, Folk’N’Irish Cruise for the third time sailing from Barcelona this October! After an illustrious competitive career, amassing numerous major titles including All Ireland, European, All Scotland and Great Britain Championships alongside his five world titles, he has now set his sights on choreographing and performing around the world.

Having led dance shows since he was 16, David decided to set up his own brand new production, Velocity, which he debuted at the Edinburgh Fringe Festival in August 2017. The show was seen by thousands of people, with some dubbing it “the best show we have ever seen at the fringe” and receiving several 5 star reviews from national press, with The Scotsman claiming it to be the “dance hour of the Fringe”!

David then went on to premiere his production in the US this November, live on Broadway, in The New Victory Theater where its huge success was hailed as one of the top 7 dance shows to see in NYC by The New York Times!!

David is probably most well known for his time on our television screens in May 2017 after being invited to take part in the world famous talent show, “Britain’s Got Talent”, where he reached the semi finals impressing world famous judges including Simon Cowell and viewers worldwide with his unique performances.

With his degree in Economics and Mathematical Sciences in his back pocket from the University of Limerick, and an unyielding desire to produce spectacular material to showcase to audiences around the world, the young Kerry man won’t be falling back on the math & economics problems just yet!!

David has been guesting with Joanie Madden & Cherish The Ladies on their Irish, UK and US tours over the past two years and is delighted to be joining them once again for a week full of madness on board the Noreweigan Epic!!

His claim to fame is being Joanie Madden’s favourite Irish dancer!!!!!!!!