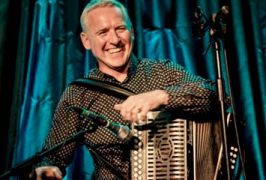 Dónal Murphy from Abbeyfeale in County Limerick is one of Ireland’s most exciting accordion players. He grew up in a very musical family and has numerous All-Ireland titles on both the Button Accordion and Melodeon. Dónal is also fluent in the Irish language.

He is a founding member of the renowned Irish band, ‘Four Men and a Dog’. The group have recorded seven highly successful albums including, “‘Barking Mad”, which was voted Best Folk Album of the year by Hot Press Magazine.

Although a master of jigs and reels, Dónal’s formative years growing up in close proximity to Sliabh Luachra, which occupies the rural area where counties Cork, Kerry and Limerick meet, ingrained in him the musical style of the area. That music is known for its exciting pulsating rhythms with polkas and slides being the music of choice. Dónal, along with Matt Cranitch and Tommy O’Sullivan formed the band, Sliabh Notes to celebrate the music from the region and together they went on to record three legendary albums and perform at many festivals around the world including the Milwaukee Irish Festival, North Texas Irish Festival, Copenhagen, Torino in Italy and many leading festivals around Ireland.

He was featured alongside dancing legend Michael Flatley for the premiere of the sold-out ‘Feet of Flames’ concert in Hyde Park in London and also performed with Riverdance at Dublin Castle in Ireland.

Dónal’s most recent musical collaboration includes joining forces with fiddler, Niall Murphy, and guitarist, Mike Galvin to form a new band called “Breaking Trad”. Since their arrival on the Irish music scene, they have been enthralling audiences worldwide with their powerful & high-octane performances.

This is Dónal’s first cruise with us and we know he’s going to have the sessions rocking onboard the Epic on our first Mediterranean sailing!

REVIEWS:
“Happy Hour” by Dónal Murphy is a snapshot of a musician still hungering to explore the most visceral elements of the music – which he does with technical brilliance and emotional warmth” Siobhan Long, Irish Times

Happy Hour indeed, well named and well played, it makes clear why he is so highly regarded, well worth checking out. Alex Monaghan (Irish Music magazine)