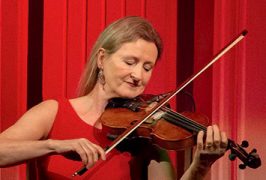 Nollaig is one of Ireland’s most gifted musicians, with her own unique way of playing traditional Irish music on the fiddle and such an utterly distinctive sound that it would be impossible to mistake it for that of anyone else. This “sound” is so attractive to other musicians that there exists hardly any major Irish artist of the last twenty years with whom she has not worked.
Her powerful presence graced Dónal Lunny’s ground-breaking band Coolfin, of which she was a founder member and with whom she had a busy international touring schedule. One highlight was their performance in a special concert celebrating the Irish roots of American country music for Island: A Festival of the Arts in Ireland held at the John F. Kennedy Centre in Washington DC which was broadcast coast to coast on network television: they shared the stage with Ricky Skaggs, Emmy Lou Harris and Steve Earle. Nollaig’s been working with Dónal off and on for over twenty years: she joined the legendary band Planxty (of which he was a founder member) in 1980, touring all over Europe with them and has been involved in a large number of Dónal’s projects in the intervening years.
Nollaig’s prodigious technique and her unique ability to play both classical and traditional music with equal proficiency, coupled with her exceptional expressive gifts has inspired a number of composers to write orchestral pieces for her. In 2003 she performed in front of millions as soloist with the RTE Concert Orchestra in a work by Shaun Davey commissioned by the Special Olympics held in Dublin. With the same orchestra she performed a piece by Dónal Lunny, commissioned in 1997 to commemorate the 150th anniversary of the Great Irish Famine, on several occasions, most recently at Expo 2000 in Hanover. In 1999 she gave the first performance in New York of a Concerto for Violin and Irish Fiddle by Evan Chambers, which had been commissioned by the Albany Symphony Orchestra.
She enjoys an unrivalled popularity among composers of film-music with an Irish tinge and has been the featured soloist on over twenty feature-films – most recently in Dancing at Lughnasa and Waking Ned. She was of course seen as well as heard world-wide in the 1992 Hear My Song (about the life of singer Josef Locke). She is herself a prolific composer, writing for Coolfin, television documentaries and for her own recording projects.
Nollaig has recorded and worked with Enya, Van Morrison, Sinéad O’Connor, Nanci Griffith, Ricky Skaggs, Rod Stewart, Dónal Lunny, Mary Black, Carlos Nuñez, Jim Rooney, Andy Irvine, Moving Hearts, The Indigo Girls, Spandau Ballet, Christy Moore, Liam O’Flynn, Dan ar Bras, Sharon Shannon, Maura O’Connell, Dick Gaughan, Paddy Keenan, Máirtín O’Connor and her sister, the innovative and influential harper Máire Ní Chathasaigh, among many others. She was a star performer in Dan ar Bras’ massively successful Héritage des Celtes project: both albums (released by Sony France) received Gold Discs in France and Héritage received the French equivalent of the Brit Awards. She has made two critically-acclaimed albums, Lead The Knave and Causeway with Arty McGlynn.
~~~~~
Nollaig’s husband, Arty McGlynn, the maestro guitarist who sailed with us on seven Folk’N Irish Cruises passed away in December 2019. He was an absolute legend who graced the stage with everyone from Van Morrison, to the Chieftains, Planxty, Patrick Street, Tommy Makem and Liam Clancy, his wife, Nollaig Casey to even the Great Craic Band on the cruise. He was the consummate performer and everyone loved and admired him. We will miss him terribly.