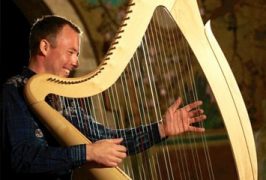 Cormac De Barra is a harper and television presenter and comes from a family of traditional Irish musicians and singers. He is the third generation of harper in the family and first studied with his grandmother, Róisín Ní Shé, in Dublin. He went on to study concert harp in the USA.

As a traditional harper, Cormac has recorded and toured with his brothers Fionán and Éamonn in the family group Barcó and performed with many groups and musicians including fiddle player Máire Breatnach, Sligo-based trad group Dervish and Brian Kennedy.

Cormac has pushed the boundaries of Irish harp beyond the traditional and the classical through his collaborations with a variety of artists including actress and punk icon Hazel O’Connor, Grammy Award-winning Clannad and composer and singer Julie Feeney.

Theatre performance credits include music for Playboy of the Western World at the Ambassador in Dublin, Tine Chnámh and Mallachtaí Muintire at Project Arts Centre, Mysteries 2000 at the SFX, Dublin and W.B. Yeats’ Cuchulain Cycle at The Riverside, London. He also made his acting debut alongside Hazel O’Connor in a show called O’Carolan’s Dream at the Edinburgh Fringe Festival.

Cormac has also been collaborating with US-based singer and songwriter, Ashley Davis, since 2008 and they have toured extensively throughout the United States since.

He is currently touring and recording with Moya Brennan, the voice of Clannad. Their first duo CD ‘Voices & Harps’ was released in 2011 and their new CD ‘Affinity’ was launched in June 2013.