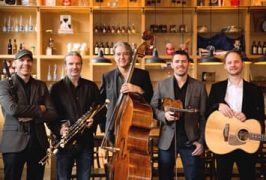 LUNASA: Music is one of Ireland’s most celebrated exports, and Lúnasa, a band like no other, has been at the forefront of that musical migration. Since the release of their 1997 recording debut LÚNASA and the band’s first tour of the U.S.—when word-of-mouth led to SRO shows and rave reviews (“This is the hottest Irish acoustic group on the planet” said The New York Times)—the all-star quintet has become one of the most popular bands on the international Celtic music scene.

“Lúnasa is a very different Irish band in many ways,” explains Cillian Vallely. “It’s an all-instrumental band. We have a double bass. We play a very diverse selection of music, including our own compositions, melodies from other Celtic regions such as Brittany, Galicia, Asturias, and Scotland, and slower melodies, often involving three-part harmonies. The melodies are played on the traditional instruments of pipes, fiddle and flute, but the rhythmic and harmonic style—the bass and guitar style—give the band a very contemporary sound.”

It’s a sound that moves beyond the long established boundaries of traditional music, and it has earned the group a following that encompasses music fans of all ages and tastes around the world. Lúnasa is also a collective that courts opportunities to grow and change, to try something different. With eight albums already in its discography, as well as solo CDs and recording and performing credits with many of Ireland’s and the world’s most well known talents, the quintet will introduce a rarity in the traditional music world with the release in April, 2013 of LÚNASA WITH THE RTÉ CONCERT ORCHESTRA.

In the years since those early concerts and CDs catapulted the band to the forefront of traditional Irish music, the members of Lúnasa have gathered a long list of credits and honors in addition to the legion of fans that spans the globe, fitting achievements for a band that takes its name from the old Celtic harvest festival in honor of the god Lugh, patron of the arts. In 2004, seven years and three albums (OTHERWORLD, 1999; MERRY SISTERS OF FATE, 2001; REDWOOD, 2003) after their acclaimed debut, the group recorded live within the supposedly-haunted walls of Ireland’s Kinnitty Castle. THE KINNITTY SESSIONS was voted Best Traditional Album of 2005 by readers of Irish Music Magazine and was nominated for Folk Album of the Year in the BBC Radio 2 Awards. Released in 2006, the SÉ album was followed by the 2008 compilation THE STORY SO FAR… The well-received LÁ NUA, released in 2010, was recorded in the ancient pagan settlement of Bavan, Co. Louth. That year Lúnasa was named Performers of the Decade at Live Ireland’s LIVIES awards and were invited to perform at The White House. It was also the year they collaborated with Natalie Merchant on her LEAVE YOUR SLEEP album and won kudos from Folk & Roots and The Independent for their closing performance at the world-renowned Cambridge Folk Festival. In 2012, the band’s itinerary included the UK (18 shows in 19 days), North America (three tours) and the sold-out performance at Dublin’s National Concert Hall with the RTÉ Concert Orchestra. Along the way, the group has toured and performed with Billy Bragg, Mary Chapin Carpenter, Ladysmith Black Mambazo and Roseanne Cash, played the Hollywood Bowl and headlined Glasgow’s international jamboree, Celtic Connections.

The individual members are in increasing demand across the globe for touring and recording work – Trevor went out on a European tour with his old band mates, The Waterboys; Cillian collaborated with The Boss, Bruce Springsteen on his 2014 release ‘High Hopes’ – the album went straight in at #1 on the album charts across the world; Kevin toured with Martin Hayes and John Doyle as The Teetotalers; while Ed has toured with Flook and Cara Dillon; while Colin Farrell has recorded and toured with the Young Irelanders.