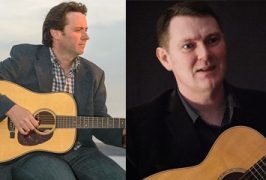 Dónal CLANCY is an acclaimed guitarist, singer and performer. His father and uncles of The Clancy Brothers and Tommy Makem were the first group to bring Irish folk song to a worldwide audience in the 1960′s and Dónal grew up in a household and community steeped in music. He spent his early childhood in Canada and the US before his family settled back in An Rinn, Co.Waterford in 1983.

His father, Liam Clancy, gave him his first guitar at the age of eight and he was playing professionally by his early teens. After returning from a residency at Delaney’s Irish Pub in Hong Kong in the mid-nineties, he co-founded the group Danú but left soon after to join a trio with his father, Liam, and cousin, Robbie O’Connell. Their debut tour in 1996 took them across the US, from the Santa Anita Race Track in Los Angeles to Lincoln Center in NY City. They continued to tour together for a couple of more years and recorded two albums before they disbanded in the late nineties.

In 1998, Dónal moved to New York where he became the go-to guitarist for many of the top Irish music acts. He contributed to albums and tours with Riverdance fiddler, Eileen Ivers, and was guest guitarist with The Chieftains on their Tears of Stone Tour in Japan and the US in 1999. From 2000 – 2002 he was a member of the Irish-American super-group Solas and in 2003 he re-joined the group Danú who would go on to become one of the most successful Irish bands today. He also contributed to the soundtrack of Ric Burns award winning documentary film New York and in 2006 released his debut solo guitar album Close To Home which The Boston Globe dubbed “a sweet masterpiece of melodic grace and riveting groove”.

In 2009, Dónal returned to live in Ireland with his wife, Mary and their three children. After the death of his father (the last remaining member of The Clancy Brothers and Tommy Makem) he began to focus his attention on the family repertoire of songs that he grew up with, while keeping the Clancy tradition alive with his solo performances.
“Dónal Clancy has bravely taken up the mantle of his illustrious forbears, particularly of his father, Liam Clancy, and performs with the same emotion, intensity, care, subtle nuance and effortless mastery. He builds a warm, sympathetic rapport with his audience, explaining, just as Liam used to do, the story behind, the origin, and his own personal connection and affectionate link with each song he performs. He has an easy way with the audience like Liam had, a grace and charm in his introductions, wonderful diction and above all, the greatest praise for a singer in my belief, his feeling for the songs is nothing short of spine-tingling”. -Joe Power (Na Conneries Singing Club, Dungarvan)

A seasoned performer with over 25 years on the road, Rory has toured extensively with The Makem and Spain Brothers and for 17 years toured and played guitar with his father, the legendary Tommy Makem. He has entertained countless sold-out venues, festivals, and theaters throughout the United States, Canada, England, Scotland and Ireland. At his best on stage, Rory captivates audiences with his skilled musicianship, his charisma and passion for the songs, his extensive knowledge of poetry and history, and his humor.

The love of song runs deep in the family. Continuing a legacy handed down from his grandmother, the seminal source singer Sarah Makem, Rory pulls the songs of the sailors, the laborers, the lovers, the fighters and the land from the pages of history and breathes life into them. An adept interpreter of folk songs, he masterfully accompanies himself on guitar, banjo, mandolin or bouzouki.

Not limiting himself to the stage, Rory has performed on movie soundtracks including A Fool and His Money, and The Lightkeeper. His compositions can be heard woven into the backdrop for PBS series as diverse as Tommy Tang’s Modern Thai Cuisine to It’s an Age Thing, to Simply Painting.

Learning from those who came before you is the essence of folk music — and Rory has the great honor of learning from the best. Of course there were the many years at his father’s side… absorbing a master at his craft. He has also recorded with luminaries of modern folk music: Tom Paxton, Noel Paul Stookey, Bill Staines, Eric Weissberg, Roger McGuinn, Dave Mallett, Gordon Bok, Jonathan Edwards, Rick and Ron Shaw, and Schooner Fare.

Through more than a quarter century of plying his craft, Rory has established himself as one of the leading forces in the song tradition of Irish music… aspiring to not only carry the torch of the past/the greats that came before him, but also dedicated to promoting the craft of the modern folk era and contributing to/inspiring the next generation of music lovers.

and so… the tradition continues.