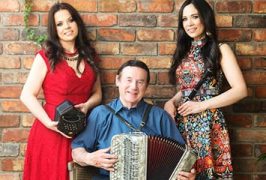 Musical families are often the backbone of multi-generational continuity within that global community, and no musical family today is more impressive in upholding the best principles of the tradition than the Mulcahy’s of Abbeyfeale, West Limerick. Mick, Louise and Michelle Mulcahy play a vast array of instruments between them but it’s the sweetness and tunefulness of their ensemble playing that is most striking. Mick plays accordion, melodeon and concertina, whilst Louise plays flute, uilleann pipes and whistle. Michelle’s vast array of instruments include harp, concertina, accordion, fiddle, melodeon and piano.
They have an unmistakable, infectious sound and their skill and enthusiasm comes from a lifetime of playing together.

Mick Mulcahy originally from Brosna in Co. Kerry is a living legend in Irish accordion playing, with a rare repertoire of old tunes which he plays in a highly distinctive style, a style of personal touch which distinguishes the work of the true traditional musician, a touch which has been passed down to his two daughters Louise and Michelle. Mick learned to play the accordion from his uncle as a child. One of Mick’s earliest musical memories was listening to Ciarán MacMathúna’s Radio Éireann programme ‘A Job of Journeywork’ which featured Mrs. Crotty, Pádraig O’ Keeffe, Denis Murphy and Julia Clifford. Mick’s father bought him his first accordion in 1956 and in 1968 Mick was chosen to represent Kerry in RTÉ’s All Ireland ‘Spot the Talent’ Competition, which he won. Mick was asked to join the Brosna Ceilí Band in the mid 60’s by fiddle player Donal O’ Connor. The Brosna went on to win the Senior Ceilí Band title at the All Ireland Fleadh Cheoil in 1972 in Listowel.

As a family they have recorded four family albums including, ‘The Mulcahy Family’ recorded with the American Label Shanachie, ‘Notes From The Heart’ and ‘Reelin’ in Tradition’ which were recorded with Cló Iar-Chonnacht. Their latest family album recorded in 2017 titled ‘The Reel Note’ has received worldwide acclaim and was awarded, ‘Album of the Year’ by Tradconnect in 2017. Mick, Louise and Michelle have also recorded individual solo albums. Mick himself is a renowned solo artist having recorded two stalwart albums on the Gael Linn label. His first solo album, self-titled ‘Mick Mulcahy’ is considered a classic album of accordion music and his later album in 1990 was titled, ‘Mick Mulcahy agus Cairde’. Michelle released ‘Suaimhneas’ in 2012 and Louise completed the chain of solo recordings by releasing her solo album titled ‘Tuning the Road’ in 2014. The albums have made regular appearances in the top ten traditional albums charts in the United States, Ireland and the U.K. As a family they have toured extensively throughout Europe, America, Asia, New Zealand and Australia, performing and teaching at festivals worldwide. Mick, Louise and Michelle have also featured on many television and radio programmes both in Ireland and around the world. They family have performed on many TG4 progammes and RTÉ programmes over the years. Mick performed on the well known TV programme titled ‘The Pure Drop’ for RTÉ on many occasions. Louise and Michelle featured on the documentary titled ‘The Green Fields of Vietnam’ which aired on RTÉ in 2014. This documentary followed their travels to Vietnam with Professor of Irish Studies at NYU, Dr. Mick Moloney. On this trip they collaborated with traditional Vietnamese Musicians, promoted Irish Culture and explored the role of Irish Aid in Vietnam. Louise and Michelle have also featured on the award winning series Port for BBC Alba and TG4, where they collaborated with traditional Scottish musicians on the trip. Louise featured on Louise also featured on the Uilleann Pipes UNESCO Heritage Bid short film submitted by the Department of Arts and Culture in 2016. On this video Louise presented spoken material and performed on the Uilleann Pipes. Both Louise and Michell also contributed to the TG4 series titled ‘Mná an Cheoil’ in 2016. This programme explored the role of women in Irish traditional music.

Louise and Michelle have won many All Ireland titles, including Louise winning four Senior All Ireland titles on the same day at Fleadh Cheoil na hÉireann in 2001. Louise and Michelle were awarded Female Musician of the Year at the Live Ireland Awards 2017 and previously in 2015 and 2005. Michelle was awarded the prestigious Tg4 Ceoltóir Óg na Bliana in 2006. Mick was awarded the Bardic award by Comhaltas Ceoltoirí Éireann at Fleadh Cheoil na hÉireann in 2017. Louise graduated with her masters degree from Trinity College in 2014 and was awarded the 2016 Doctoral Fellowship in Irish Music Studies at NUI Galway. Louise is currently researching the unique story of women in uilleann piping and has lectured on this subject at numerous music festivals throughout 2018 and 2019. Michelle graduated with her PhD from the University of Limerick in 2012, her dissertation being titled ‘Aistear: Performing Cultural Encounter: An Arts Practice Investigation of Karen, Burmese and Irish Harping Traditions’ at the University of Limerick.

“IF YOU like the ‘pure drop’, here it is – traditional Irish music at its natural, unadulterated and most seductive best”- The Irish Times

“Theirs is a virtuosity that doesn’t need to be proved or worn on the sleeve but just pours out with all the naturalness of speaking” – Folk & Roots Magazine.