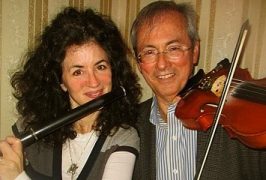 Manhattan native, John Reynolds is most often heard playing the fiddle with his wife; Bronx born flute and whistle player Margie Mulvihill – in the “Pride of Moyvane Ceili Band”. For many years, they both had successful musical careers, but recently they have been performing for festivals and are a very popular ceili band in the New York Tri-state area known for their lively and rhythmic percussive style, perfect for dancing.

John was sent for classical violin lessons at the age of five. His mother, Eileen (from near Grange, Co. Sligo) had played the fiddle as a child. Although his father, Paul (a Boornacoola, Co. Leitrim footballer), did not play an instrument, he was very fond of traditional music and was a good whistler. After a few years of classical music, his mother sent him for Irish music lessons to the late Roscommon accordionist John Glynn who was teaching in the neighborhood. Right from the start, John took an interest in the music and spent countless hours growing up listening to Sean McGuire’s recordings and also those of Andy McGann and Paddy Reynolds. After John Glynn’s untimely passing in 1971, John was sent to study with Pete Kelly. There, John was an early member of the Shannonaires, a ceili band that Pete taught and trained which competed in fleadh cheoils and toured in Ireland in the early 1970s. Influenced by Sean McGuire’s recordings and Pete Kelly’s teaching and encouragement, John won third place in the 1972 Fleadh Cheoil na hÉireann in Listowal, Co. Kerry. Throughout the 1970s and the early 1980s, John played music for dancing competitions at the feiseana in the northeast, most often playing with Pete Kelly or Paddy Reynolds.

In the early 1980s, John started an almost 20 year association with Dublin-born ballad singer Michael Jesse Owens – a gig that started out by filling in for box-player John Nolan, who had been a fellow John Glynn student. Aside from playing lively trad music with Jesse’s band, John developed his skills for backing up Irish and folk ballads and songs of all types. Those skills have been for many years – and still are – in demand in the ballad and showband scene around New York and John often has been be heard accompanying singers like Guss Hayes, Kitty Kelly, Mike Byrne, Tom Birmingham, and John Morrison.

Margie is a wonderful whistle and flute player. Her parents both hail from County Kerry, the region in Ireland known for it’s wonderful polkas and slides. Margie started Irish dancing at a young age, training with her uncle, famed Irish dance instructor Jerry Mulvihill. She also took music lessons from the great Martin Mulvihill and played in his All-Ireland champion band, The Glinside Ceili band. Margie is the mother of four musical children, Erin Loughran (a fine fiddler who was the New York Rose of Tralee and music teacher), Blaithin Loughran (accordion player and member of Girsa), Neidin Loughran (whistle, guitar, song) and John Paul Reynolds who is 9 and playing mandolin. The family was recently featured on the HBO series “The Music in Me”. Margie and John enjoy the exchange of energy between themselves and the set dancers and know how to get the dancers and crowd going!

And in recent years, she has taken up the roll of tradition bearer as she has taught dozens of children to play music in the well-known Irish enclave of Pearl River, New York. Before starting up the Pride of Moyvane, Margie was a member of the fabulous traditional music and singing group, Morning Star. Margie and her family were featured in the HBO documentary