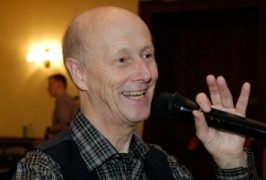 PAT MURPHY: My earliest memories from my childhood when the Ballycommon Set, which was called the Plain Set at home, and the Cashel Set were the only ones we knew about. We lived in the parish of Upperchurch, in County Tipperary, in the South of Ireland.My father Jack played the accordion and he played for house dances in earlier years. I learned to play music from him, so my first connection with Irish Set Dancing was as a musician.As children, we also learned to dance at home with our parents and neighbours.

In the early 1980’s, when I was playing music with a few friends for a Scór Set Dancing Competition, I was asked to dance in our Club’s competition team, as one of the male dancers was injured during rehearsals.I danced, we won and this begins my modern dancing story! As an experienced, practicing school teacher and musician, I think I had a good preparation for teaching in the set dancing world. Also, I have always enjoyed meeting and spending time with people, so meeting new dancers on my travels has always been a great experience for me.

I was invited to teach the sets at a local club and I taught weekly classes for many years in Dublin and nearby counties. This was at the beginning of the set dance revival and there were not many people around with enough knowledge of the sets available to teach, so I was often asked to travel to other parts of Ireland at the invitation of various people who had attended or heard about my classes.This was the start of my life as a traveling Dance Master.

My travels over more than 30 years have now taken me to every county in Ireland and to most countries in Mainland Europe, including France, Germany, Italy, Holland, Denmark, Belgium, Luxembourg, Norway, Spain, Portugal, the Czech Republic and Russia. Some of the best recent Dance Festivals in my experience have taken place in France, Italy and Germany.I have visited many parts of America, including, California, Seattle, Chicago, Milwaukee, Florida and New York.I have travelled to Canada, to Halifax, Nova Scotia, Prince Edward Island, Montreal, Toronto and Ottawa.My travels have also enabled me to teach in Japan, Australia and New Zealand.In April 2018, I visited Australia for the third time and it was wonderful to have more than 100 dancers taking part in our classes in Melbourne.

When I began teaching set dancing, I made notes on the dances as I learned them and then shared these notes with my dancing friends. This was the beginning of my writing. In 1994, I was invited by Irish Publisher Mercier Press to write a book on Irish Set Dancing. My first book, entitled Toss the Feathers, Irish Set Dancing was published in 1995. It contained 64 dances and became the first standard reference Book for Set Dancers world wide. I continued writing and my second book, The Flowing Tide, More Irish Set Dancing was published in 2000. Since then I have continued collecting dances and three more dance books have been published, the latest officially launched at the beginning of 2018.I feel blessed and privileged that so many dancing friends have shared their dancing and knowledge with me to make the books possible.Together, the five books form a complete anthology of Irish Set Dancing from the revival in the 1970s to this year, 2019.

I have also produced some instructional DVDs on Set Dancing, the first recorded during my time living in Westport, county Mayo and others recorded during our Music and Dance Summer Schools in Tubbercurry and Drumshanbo.